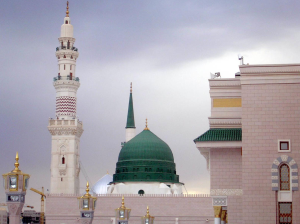 The greatest source of mercy Allah has given to mankind is Prophet Muhammad (prayer & peace are upon him, his family, his progeny and his companions), ‘the mercy to the worlds’. Allah the Almighty informs us that not only is He Himself perpetually sending blessings upon the Prophet, but His angels are perpetually asking him to do so as well. He then has instructed every believer to invoke His blessings upon His Beloved and to send salutations unto him in the following passage:

“Indeed, Allah confers blessing upon the Prophet and His angels invoke Him to do so. O you who believe, invoke divine blessings upon him and salute him with peace.” [Sūrat al-Aḥzāb 33:56]

The following are few  ahadith that emphasize the  merits and benefits of sending prayers and salutation upon Allah’s Messener:

“Verily, among your best days is Friday, so invoke blessings upon me in abundance on this day, for your invocation is presented to me.’ They said, ‘O Messenger of God! How can our invocations be presented to you after your bones have turned to dust? He replied ‘Verily, God has forbidden the earth from consuming the bodies of the Messengers.” [Ibn Majah, Annassa’e and others]

“The closest people to me on the Day of Resurrection will be those who invoked the most blessings upon me.” At- Tirmidhi]

Abu Hurayrah (May Allah be pleased with him) reported: The Messenger of Allah (prayer and peace be upon him, his family, his progeny and his companions) said: “There is not one of you who sends his greetings upon me except that Allah returns the soul to my body (in the grave) and I return his greeting.” [Abu Dawood]

Ibn Mas’ood (May Allah be pleased with him) reported: The Messenger of Allah (prayer and peace be upon him, his family, his progeny and his companions) said: “The people who will be nearest to me on the Day of Resurrection will be those who supplicate Allah more often for me.” [At-Tirmidhi]

Who from amongst us would not want to be in the company of the Beloved of the Lord, who has been given the authority when no other authority will exist to intercede for us, let alone be closest to him!

Also, there is not a single Believer who does not hope for his supplication to be answered by the Answerer of supplications. Invoking blessings upon the Prophet when asking our Lord, hastens a response from our Merciful Lord. The Prophet’s intercession with our Lord is a Mercy from our Lord.

So, join us every Thursday, after Isha prayer to learn more about the merits of sending prayers upon the great Messenger of Allah ((prayer and peace be upon him, his family, his progeny and his companions). Our gathering is 30 minutes long and is structured as follows:

It’s Every Thursday,
After Isha Prayer